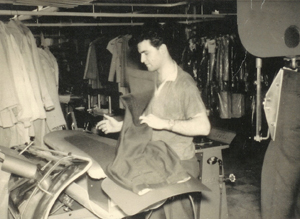 In 1955, at the age of 15, Tony (Antonio) LoScerbo emigrated from southern Italy to Canada. He settled in Winnipeg near family members who had arrived several years earlier. Hard-working and eager to learn both a new trade and a new language, Tony took jobs at local dry cleaning establishments where he was able to apply the tailoring skills he’d acquired in the old country.

By the early sixties, Tony was working full-time in the dry cleaning industry as a tailor, presser and cleaner, and by the mid sixties had been hired to manage the dry cleaning department of a large firm. There, he worked hands-on and oversaw the daily operations of the facility, the handling and maintenance of equipment, and the training of regular staff and even casual help.

Tony made quite an impression on one of his trainees—Irene, a university student working over the holidays several summers in succession. By the late sixties they were married. Taking seriously his new responsibilities as a husband, and then, as a father, Tony soon refocused his business energies and expertise—in June, 1970, Best Care Dry Cleaners was born.

For the first few years Tony operated in a rented premisis where he handled every aspect of the business almost singlehandedly. Irene took care of the bookwork, and eventually, when the couple could afford one or two employees, the payroll and banking duties. In late 1976, the couple was able to purchase the building at 998 Main Street, Best Care’s current home.

Over the years, Tony kept up with ever-changing technology and methods by attending seminars and national and international trade shows. He devoted his time to producing a quality dry cleaning product and he trained his staff to do the same.

Save your valuable time and let Best Care wash, dry and fold your laundry. We can even pick it up and drop it off when it's ready!

Register for delivery service Can't make the trip to our shop?
Let us come to you!

Request a pick-up Is your yellow bag ready?
Call us for pick-up!

Our Specialty Services Expert care for your garments.

News From Best Care All the latest from our
offices on Main Street.